This week in PSHE, we have been learning why regular exercise is important. The children now understand that exercise not only affects and physical state but also our emotional wellbeing and our ability to focus and concentrate for longer periods of time. To show their understanding they replied to an alien visitor with a short letter. 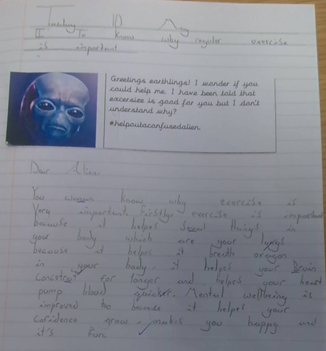 This week in science, we started our investigation into sunflowers by planting a range of sunflowers. Over the course of the coming weeks, we will be making careful observations including the rate of growth, the numbers of leaves and the thickness of the stem. The children planed their scientific investigation by identifying equipment needed, listed what plants need to grow and drew diagrams to identify the steps to growing a sunflower and then in small groups, the children planted seeds into potted compost. Here are the first signs of growth.

This term in DT we will be creating a cushion using running stitch and then attaching an Appliqué using a cross Stitch. To begin with this week, the children  continued to practise their cross stitch skills which they learnt last week and thoroughly enjoyed it. They then progressed to creating their animal Appliqué using pins and templates. There has been a real buzz of excitement amongst the children this week as they have had the chance to learn new practical based skills.

This week in RE we have, the children have been learning about how religious items that might be found in a Christian home. The children identified several items including a The Bible, Palm cross, the crucifix, prayer cards to name a few. After identifying the items,  they used their investigative skills to learn about the items and explain why it may be important to a Christian family. 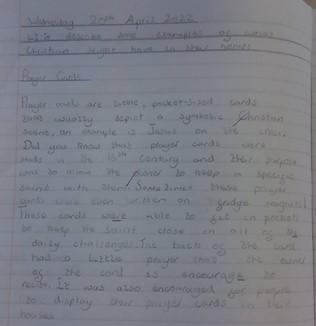 This week in art, the children completed the creation of their volcanoes, using mod rock and a range of colours to create a lava effect. This topic has closely linked to our Geography topic which was volcanoes. To complete the project, the children used lemonade and mentos to create a chemical reaction and simulate a volcanic eruption. 3M had great fun watching this and nearly erupted themselves! 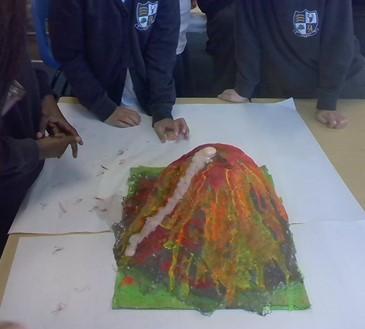 This week in Geography, the children have been learning about how and why earthquakes and volcanoes happen. The children identified the tectonic plates that sit above the Earth’s mantle and learnt about the different ways in which the plates collide (Convergent, divergent and transform) with each other. To further help with their understanding of the tectonic plate movement they used Oreos to simulate the movements and then created diagrams and explanation for each of them.

This week in science, the children have been conducting a scientific investigation in to the permeability of clay, sandy and loam soils. The children made predictions, identified the variables,  created diagrams and conducted the experiment. They concluded that the sandy soil was most permeable and clay soil was the least permeable due to the particle sizes.